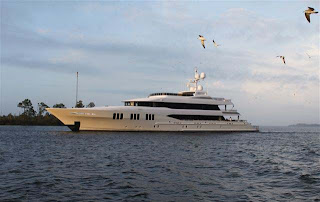 The latest launch from Trinity Yachts is the 57.6 metre tri-deck Carpe Diem built mostly of aluminium. Contrary to early renderings she is finished in all white paint. and With Naval Architecture in-house by Trinity, the interior styling has been completed by Carol Williamson.
Four roomy staterooms plus one alternative that doubles as the gym provide guest accommodation for 10 guests with room for two more in the large master suite located forward on the main deck.
The master stateroom has its own ensuite bathroom. On the starboard side of the space there is an office for the owner. Below decks, there is accommodation to sleep ten crew members in the forward part of the hull; ahead and out-of-sight of the guest accommodations. A separate stairs on the port side allows crew to pass around the guest’s rooms and onto the main deck.
The captain’s quarters is located directly aft of the bridge on the Carpe Diem and has its own private bathroom ensuite. One deck up and you reach the open-air sun deck. The aft part of the deck is dedicated to storing tenders and main PWC/toys. Forward of this area is a circular seating region serviced by a small bathroom (toilet and sink) on the port side. There is a bar to seat six on the port side as well and enough space on the other side to place lounge chairs.


On the forward most part of the deck is the Jacuzzi, situated along the yacht’s centreline. It is flanked by a large sun padded area.
If the sun deck did not seem to have enough space for every one, the upper and main decks are cut out to entertain and relax guests. Aft on the upper/bridge deck there is a large round table to seat twelve at a time in a slightly less formal manner.
Moving forward through the sliding doors is the sky lounge. It is outfitted with seating in a defined and squared setting. Formal bar to seat five is located on the port side corner.
One deck below on the main, a similar pattern has been made. There is also the formal dining area where the long rectangular table seats twelve (like the round al-fresco table on the above deck).
Carpe Diem, hull number T047, is fully MCA compliant and built to class with ABS Powered by twin CAT 3516B marine diesels delivering 3,384 horse power each she can achieve speeds of 17 knots.