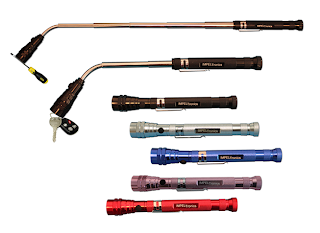 Either superyacht engineers have dropped a lot of ‘hard to locate’ parts down into the bilges recently, or their girlfriends have been hard pushed to find them a suitable Christmas present.

Whatever the reason, sales of the Impeltronics Extendable Magnetic LED Flashlight have set new holiday sales records.
Earlier in 2013, the company’s product has been endorsed on a TV newscast called “Gadget Friday”.  It also featured in a Talk Radio show and most recently another television show segment on Public Television.
These endorsements seem to have been the catalyst in the company’s recent success selling the product.
The engine room friendly device is an LED flashlight that extends to nearly two feet long with a magnet on both ends of the unit.
The product includes:
The magnet on the bottom can lift up to 8 pounds and there is also a magnet on the light head that is very convenient for retrieving metal objects in hard to reach places.
The Impeltronics Telescoping flashlight can only be found on the company website and through the current distributors.