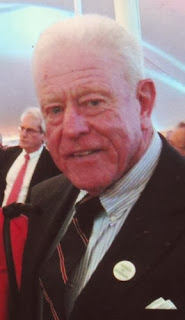 Yacht Broker J. Burr (Joe) Bartram, Jr. who together with Bruce Brackenhoff Sr created one of the most famous of yacht brokerage brands in America has died.
He was 79 years old when he passed away peacefully at his home in Ft. Lauderdale, FL on December 24th.
The Son of J. Burr Bartram and Mary (Sheppard) Bartram, he was born in NYC July 12, 1934. He attended Choate School in Wallingford, CT. He served in the US Navy from 1953-1955.
In the very late 1950s and for the first half of the 1960s Joe was associated with Northrop & Johnson in the Stamford Ct. Office working with his dear friends Bruce Brakenhoff, Sr., Julien Elfenbein and Dick Loh.
In 1967, he and Brakenhoff formed, what was to become unquestionably the “Gentleman’s” Yacht Brokerage firm of the Industry a firm that he and Brackenhoff ran until they sold out to their collegue David C. Lacz in 1998.  In 2001 he relocated to Fort Lauderdale, FL and continued to work with his clients and the company until shortly before his death.
Joe was an active Member of the New York Yacht Club, the Indian Harbor Yacht Club, and the Storm Trysail Club, as well as being a Founder of the New York Yacht Club’s Harbor Court. Over the years, he served on many NYYC committees including the Race Committees, House Committees and Membership committees.
He was active in several America’s Cup Syndicates and was Co-Manager of the Courageous Syndicate, which successfully defended the Cup in 1974.
In addition to having orchestrated some of the biggest deals in the industry at the time, the impact, influence and friendships that Joe had among many of the Super Yacht’s finest Captains, Brokers, and Crew was unmatched. His guidance and mentorship will last for generations; and without question, the Industry that Joe loved so much will forever benefit from his leadership, passion and integrity.
Joe is survived by his wife Barbara, his sister Nina Griswold and numerous nieces, and nephews, and hundreds of friends.
A Memorial Service will be held in Ft. Lauderdale, Florida, and an additional Service in Greenwich, CT. Dates to be announced later.