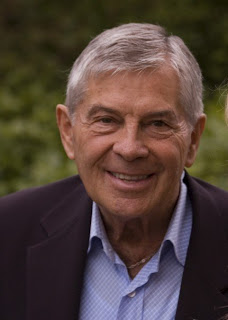 The Henri of Henri Lloyd, Henry Strzelecki, died on Boxing Day aged 87.
Known universally as “Mr. Henri” he was a keen sailor and knew as well as any that the available clothing for that sport was woefully inadequate. Materials constructed from man-made fibres were in their infancy, but true to the traditions of the garment industry, “Henri” uncovered those that were suitable for his purpose – that of producing wearable weather-proof clothing – among them Bri-nylon, which was to become the base cloth of his early foul-weather gear.
Entering a partnership with Angus Lloyd in 1963 to form Henri-Lloyd Limited. Those who wear his clothing today will respect the innovations he inspired from the hand-taping of the seams to prevent leakage to the development of non-corrosive nylon zips with the Swiss firm of Riri; and for personal safety, the inclusion of integrated harnesses that have saved many lives.
In 1985, Henry Strzelecki was awarded the MBE for services to the clothing industry, and in both 1986 and 1987 Henri-Lloyd Limited received the Queen’s Award for Export Achievement.
In 1987, he was also made Marine Personality of the Year by the Marine Trades Association.  The Gold Cross of Merit was awarded to Henri by the President of Poland in 1990.
The following year he received the Personality of the Year from the Sartorial Society for services to the British clothing industry, and the same year he received a Lifetime Achievement Award from the British Marine Industries Association and the Royal Yachting Association.
He was due to receive a Lifetime Achievement Award from the Yachting Journalists’ Association in January; it will be presented posthumously.
Henry Strzelecki, born 4th October 1925, died 26th December 2012 pre-deceased by his wife Sheila (d 1999), is survived by two sons, Paul and Martin, (the joint chief executives of Henri-Lloyd Limited) and a daughter, Diane, eight grandchildren and two great-grandchildren.