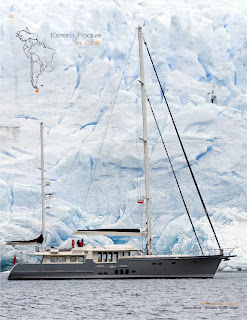 Gary Hancock the Captain of Hortense has filed a report detailing how with his owner on board they sailed around Cape Horn under full canvas tacking on a light Southeast breeze.

This infamous Cape, which has challenged sailors for centuries, allowed him an easy passage on this occasion.
He said, “With perfect conditions for a landing we hove-to in the lee of Horn Island and the crew raced up the hill to visit the lighthouse keeper, make an entry in the log book and get that much-coveted “Cabo Hornos” stamp in their passports.
That night, shortly after anchoring in a well protected bay north of the Horn, the sky turned an ominous grey and within a couple of hours the boat was being lashed by gale force winds and snow squalls.
Celebrating the occasion over our measure of rum the conversation moved quickly to future adventures as we set our sights on South Georgia and Antarctica for next season.
Making our way deeper into the Fjords of Chilean Patagonia we visited several glaciers, manoeuvring as close as we could to experience the magnitude of these rivers of ice as they move slowly towards the sea. From a safe distance we watched as they creaked and groaned while pieces of varying sizes broke off and crashed into the water.
We made the most of every opportunity to go hiking high into the mountains, appreciating spectacular views of the surrounding snow capped peaks with the boat far below.
At night we anchored close to the shore in small coves, using long lines from the stern to secure Hortense to trees, and enjoyed perfect shelter while the wind howled overhead.
Another highlight of our time sailing south of 50°S was the prolific wildlife. On one occasion we shared the Beagle channel with a family of Orcas. Just after rounding Cape Horn a Southern Right whale surprised us by surfacing noisily alongside Hortense.
Best of all was a magical half hour spent hove to in a deep fjord while a Humpback whale circled just a few meters from Hortense’s hull. Albatross, Magallenic Penguins and Sea lions were our constant companions as we explored these cold and remote waters.”
Hortensehas now voyaged in a wide range of conditions and has proved to be a great cruising boat, well suited to the challenges for which she was designed and built.  Since leaving JFA on her maiden voyage in August 2009, Hortensehas sailed over 22 000 nm including a 4 000 mile shakedown sail around the Atlantic Ocean, two transatlantic crossings, a Caribbean and Mediterranean season and a passage from the Mediterranean to Patagonia.