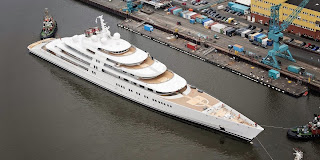 The report suggests that as money for them is no object, billionaires from Oracle CEO Larry Ellison to Russian tycoon Alisher Usmanov have spared no expense in indulging their appetite for luxury assets such as private islands or top-of-the-line super yachts.

The Wealth-X list shows that luxury yachts are the most popular luxury asset acquisition.

Eight of the 10 billionaires in the list own these luxury vessels.

At number one on the list is UAE President Khalifa Bin Zayed Bin Sultan Bin Zayed Al Nahyan (also known as Sheikh Khalifa) who purchased the world’s largest megayacht Azzam in 2013 for a reported sum of US$627 million. Wealth-X calculates that the value of the yacht is merely 3.5 percent of Sheikh Khalifa’s net worth of US$17.9 billion.

At # 2 is Roman Abramovich’s  Eclipse with a reported value of $US485 million
At # 3 and owned by Russian vodka distributor Yuri Scheffler is Serene with a value quoted as $US330 million
At # 4 the Philippe Starck-designed A belongs to Russian oligarch Andrey Melnichenko which the report suggests cost him $US323 million.
There is a tie for # 5 with Pelorus, and Dubai both quoted at $US300 million
There is no # 6 but at #7 is Russian oligarch Boris Berezovsky’s Radiant, said to be $US286 million
# 8 belongs to Alisher Usmanov, Russia’s wealthiest man, She is called Dilbar and the report gives her value at $US263 million

Comments RSS Feed
« Off the Milk Run, Sailing Down into Asia and the South Pacific.
SatCom Domes on Superyachts Soon to be a Thing of the Past »