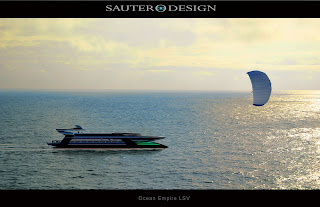 In recent months there has been a seemingly endless stream of Eco friendly conceptual superyachts that grab the headlines and find their way into the blogs written by tree huggers.
The latest is the Ocean Empire LSV (which apparently stands for life support vessel).  It is described as a 44 metre Solar Hybrid Superyacht that comes complete with 2 Hydroponic farms and fishing facilities so that those on board can harvest the sea.
As with all these concepts she is intended to utilise solar powered propulsion systems and all hotel amenities supplied by harnessing 3 major sources of sustainable of energy.
The first and foremost source of energy is provided using Solar Cells that cover the entire surface of the vessel.  The sun at the same time illuminating 2 Hydroponic farms to grow the lettuce and mung beans.
The second source is energy from the Wind which designers hope will power an auxiliary automated SkySail that drives the Ocean Empire to 18+knots while charging her GM ESS2 batteries through power sailing KER.

The third source is energy from Waves captured through Motion Damping Regeneration (MDR).  A new form of ATMD (Adjustable Tuned Mass Damper) developed in collaboration with Maurer Sohnes Gmbh.
The MDR system is basically an ATMD already utilised in skyscrapers such as Taipei 101 to reduce their swaying motion. In this application 16 tons of batteries are the Mass while linear generators produce up to 50 kws of electricity as they dampen the motion of the vessel.
Designer Richard Sauter believes, the concept will if built liberate the Superyacht community from its strict dependence on unsustainable resources by harnessing the renewable collective power ever present in the Earths Biosphere.
Conceived as catamaran, the proposed Daimler Turbo Compound BueTec engine is the most advanced EPA Diesel ever built.
Her Sunpower Solar Cells would the most efficient to date as would be her Voith Surface Drives.
Her full range of operation which extends from a 50% reduction in fuel consumption and CO2 emissions to Ultra Green Carbon Neutral and Zero Carbon cruising.

The yacht would if a buyer could be found employ existing OEM products and cost little more than her conventional Superyacht counterparts.