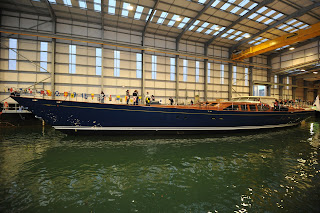 The 46 metre sailing yacht Christopher, has been launched into Falmouth waters by the Pendennis shipyard.
The project commenced at the end of 2008 when the yard announced their partnership with Ron Holland Design and Palm Beach Yachts International to build a new performance cruising ketch. Following on from a detailed three-month design and planning phase the first aluminium arrived at the yard in April 2009 at which point the build commenced. Although the 22 month build timeline was extremely challenging the builders maintained an effective schedule of works due to detailed pre-planning and efficient decision making throughout.
The yacht offers three staterooms and a study providing the Owners and their guests with accommodation for up to 12, with a further four cabins to sleep up to eight crew. The rig is due to be in January, alongside the final interior and exterior finishing before she is delivered in time to race in the St Barths Bucket Regatta at the end of March 2011.